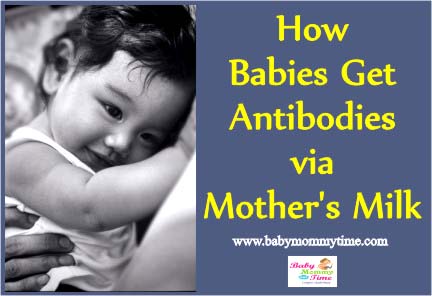 Babies up to 1 year of age, who are on Breastfeeding get Directly Antibodies and Medications from their mothers. As per Many Studies Mother’s Bodies makes Antibodies to Fight Germs and Diseases on behalf of Babies and these are passed through Breast Milk which keeps Babies Safe and Healthy.

That is the Reason all Pediatrician suggest mothers to keep Breastfeeding their babies till they start developing immunity. Mother’s milk is known to have magical capabilities in preventing diarrhea, vomiting, constipation, eczema, and many other infections. No formula milk can make as a perfect substitute for mother’s milk.

It has been said that if the mother has suffered from some disease or illness earlier in her life and have had developed antibodies to fight against that disease, then the same antibodies will be passed to your baby and she will be automatically protected/ immune from that illness.

What Happens at Pregnancy Phase

During the Phase of Pregnancy, the antibodies taken by my mother in the last 3 months are passed to her unborn baby through the Placenta. And, this type of Immunity is called Passive Immunity, as the baby does not produce the antibodies itself.

It’s totally depending on Mother’s Immunity which decided which antibodies will be passed into the baby’s body. We all know that breast milk/mother’s milk contains antibodies, which gives them strength and power to fight against infections and various viruses. Breastfed Babies have Passive Immunity for a Longer Period.

The period in which most critical antibodies are made

The thick yellowish milk (Colostrum) produced by the mother after the baby birth for the first few days are considered to be the best source of antibodies, which is also considered as the building block of any newborn.

Babies which are born Prematurely didn’t get time to develop an immune system, as most of the immune system is made in the last few weeks of pregnancy. That is the reason many premature babies are normally struggling with many diseases in their early months, the Best thing a mother could do is to make sure her baby gets as much mother’s milk as possible to cover up the last few weeks of pregnancy.

Consult before popping up any Medicine

After giving birth all mothers are always advised to consult with their pediatrician and gynecologist both before taking any medicine, even if that was normal before pregnancy. This becomes even more important if you are breastfeeding your baby.

As, there are many medicines that can pass through from their mothers to babies, and will surely affect the baby’s immune system and health some common symptoms in babies are loose motions, vomiting, and fever.

Pre and Post-Pregnancy Must Have Products